skip to main | skip to sidebar

Yesterday's Battenkill preride was blessed with good weather and a big crowd. Dieter has turned this event into a fundraiser for Farm Team and, from the looks of it, they made some cash! Although the weather was cold, the cloudless blue sky made everything seem much warmer, and if race day turns out even this nice it will be a good thing. There were icy puddles -- one in the parking/registration area and a few along the side of the road in the early part of the ride, but they were always in areas that I never would have been riding. And, yes, it did warm up during the ride and the ice melted away.

The course was generally in good shape. The paved roads showed some signs of the past winter, with some broken pavement and lots of sand, especially on the corners. I do hope that the corners will be swept before the race on April 10. The dirt sections were, in general, quite good. Dieter prevails upon the transportation jurisdictions to refrain from grading any of the roads until the race is over, so they were generally what I like to call "Battenkill Cement," which translates to rock solid with the occasional rounded potholes and random loose stones. Thanks to the cold weather during the week there were areas on some roads that had frost heaves, and there were a few spots that were soft and somewhat muddy, but they were the exception, not the rule.

So, what was the new section like? As much as I was lamenting the loss of eight miles of gentle downgrade on pavement, the addition of 10 miles of more climbs and dirt just added to what makes this course truly Battenkill. It certainly added time to the course, as the ride took me 20 minutes longer to complete than it did last year for exactly the same normalized power. The "new" section had a nice steep dirt climb with little sun exposure, so it featured the highest snowbanks and probably the most muddy sections on the course. The dirt descent was good and smooth, and I could let it go. While at speed I did encounter some soft riding surface that had the effect of slowing down my bike just a bit. My body took a nanosecond to respond, so that was exciting!

I really love the last third of this course. Mountain Road was in good shape as was Meetinghouse. In fact, Meetinghouse was better than usual, with any potholes being on the section where you would be slowing down to go up the last rise. Stage Road was also good, but that could just have been the euphoria that I felt, knowing that it was the last climb of the day. Kind of a bittersweet feeling, such a wonderful ride was almost over. This definitely is a classic and enjoyable course to ride on, which becomes so much more painful on race day. Oh, right, they are all painful on race day.

Bottom line: the roads were in decent shape with nothing out of the ordinary to report. The biggest unknown will be the weather. I am sure hoping that it will be a repeat of yesterday.
Posted by MargaretThompsonCycling at 12:02 PM No comments: 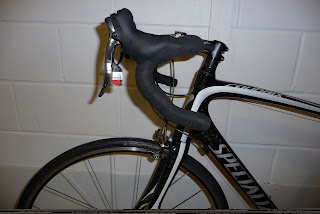 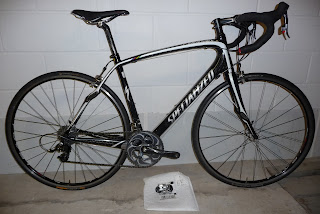 This bike is by far the most amazingly wonderful road bike I have ever ridden. I am a fan of rides lasting longer than four hours – day after day – and this bike has been key to making those training days happen! I have never been on a bike so comfortable, yet the bike responds super-quickly to the rider’s demands to go faster. It climbs like a dream and soaks up rough road at the same time.

This bike has been used and raced, but never crashed or dropped. I am always aware that I will eventually be selling my bikes so I strive to keep them in like-new condition. This bike is no exception. It has been professionally maintained. The drive train has been inspected and is in very good shape. Components are SRAM Red shifters and rear derailleur, with Force front derailleur and brakes.

Included with this bike is a brand new Red rear derailleur. I was able to warranty the original rear derailleur, and it is pictured with the bike. It will be installed before this bike is shipped off to its purchaser. Also new: cables and housing, brake hoods, handlebar tape, and Specialized Avatar saddle. The Roval wheels have seen very little use because I race and train with a Power Tap and usually ride with another front wheel. The tires are Continental 4000 clinchers and are lightly used.

Specs on this bike can be found at http://www.specialized.com/us/en/bc/SBCBkModel.jsp?arc=2009&spid=39259&menuItemId=0&gold_ses=

More photos available upon request. Email me at thompbike@gmail.com

Posted by MargaretThompsonCycling at 4:42 PM No comments: 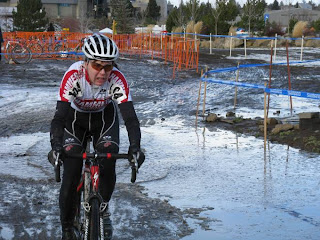 Neither snow, nor mud...